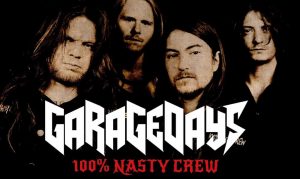 GARAGEDAYS was formed in 2005 by frontman Marco Kern and following a small number of line-up changes the band stand with this line up since 2008:

Various demo CDs were produced, leading to “Dark and Cold” which became the band’s debut official release with Massacre Records in 2011.
Their promotion of the debut included a European tour with death metal legends MASTER.
Following on from the success of the first album the band has worked hard with live shows, supported bands like EXODUS, ROTTING CHRIST, SIX FEET UNDER, GRAVE DIGGER to name a few, and brought together the right team to help push on to the next level hence the involvement of RALF SCHEEPERS (PRIMAL FEAR) and ANDY LA ROCQUE (KING DIAMOND).
GARAGEDAYS was on tour with JAKE E LEE´S RED DRAGON CARTEL in Belgium, Germany, Austria, Hungary and the Czech Republic in May/June 2014 to promote their new album „PASSION OFDIRT“ released 28th of April 2014!

In spring 2015 they´ll supported U.D.O on his massive 3 month Europeantour through 13 countries!
Currently the band work on their 3rd studioalbum with legendary METALLICA Producer Flemming Rasmussen.

After this record GARAGEDAYS sign a worldwide record deal with El Puerto Records. A new studio album will come in summer 2020.